The Liberation War Museum in Dhaka, Bangladesh was established in 1996. It commemorates the heroic struggle of the Bengali people for their democratic and national rights. The struggle turned into an armed conflict following the genocide unleashed by the military rulers of Islamic Republic of Pakistan, which culminated in the emergence of Bangladesh as a secular, democratic state in December 1971.

The prime objective of the Museum is to make the new generation aware about the spirit and aspirations for which their forefathers had fought. It also encourages them to take a stand against violations of human rights and the acts of genocide carried out in Bangladesh and its prevention in any part of the world.

The Museum is the outcome of a citizens' effort and is run by a Board of Trustees. It is now recognized, nationally and internationally, as a credible institution on the history of Bangladesh's independence. The Museum, through its various programs endeavors to link the history of the Liberation War with contemporary pressing social and human rights issues. It is a founding member of International Coalition of Sites of Conscience and is an institutional member of the International Association of Genocide Scholars.

The Museum was initially housed in a rented two-storied colonial building with displays in six galleries. Over the years the Museum had enriched its collection, which includes rare photographs, documents, media coverage and materials used by freedom fighters and martyrs of the Liberation War. However the Museum could display only a small portion of the collection due to paucity of space. Right from the beginning the dream was to build a proper and permanent museum as a storehouse of historical facts and knowledge.

In April 2017, a permanent Museum complex was inaugurated in the Civic Centre, Agargaon in Dhaka city, with large floor-space, endowed with modern facilities for display and archiving, auditorium, seminar hall, open-air theater, library, film center, etc. The permanent museum space and facilities strengthened the efforts of the Museum to expand its reach and activities. 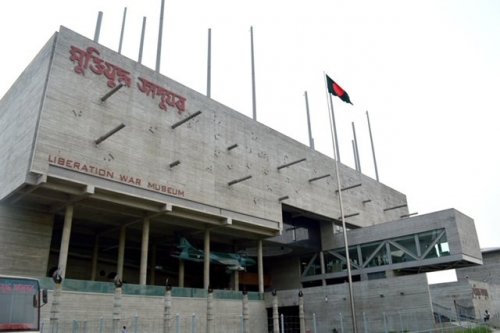 Attempt is made for visitors to the Museum to realize how the fundamental principles of democracy, secularism and nationalism of the Bangladesh Constitution (1972) evolved through popular struggle and sacrifices. Through displays in the gallery as well as regular programs, the most important of which are two educational programs, one for Dhaka city and a travelling museum for schools in the remote villages, the Museum highlights the core values of the Liberation War.

Students from various educational institutions of Dhaka city are brought to the Museum to introduce them to the history of the nation.

The school program was expanded in 2007 when the Museum was able to mount display inside a long-haul bus which started to reach-out to the school children in the remote parts of the country. The students viewed the display inside the bus and were encouraged to interview elderly people of their family or community who had witnessed or taken part in the war and write down the eye-witness accounts to be sent to the Museum.

The "Oral History" collection now consists of more than 60,000 historical narratives provided by the students. The teachers from the educational institutions extend their cooperation to collect the eye-witness accounts and send them to the Museum. They have formed a Teacher's Network to promote the cause of memorialization.

In 2001 the Museum excavated a killing field in the Dhaka suburb and built a memorial site which became a hub of victim-centric community engagement. 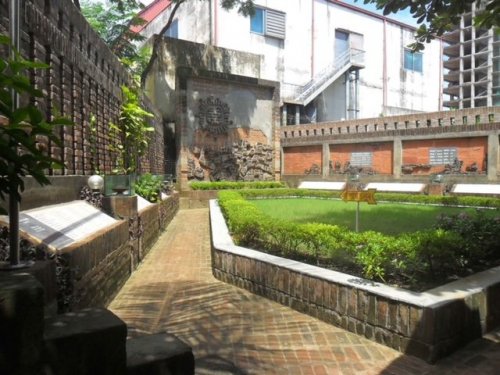 The Museum holds an annual festival of documentary films to highlight the struggle for liberation and human rights of people around the world. The festival seeks to view the human struggle and suffering for justice from a global perspective. With the break-out of COVID-19 crisis the festival in 2020 was held online which greatly expanded its reach. In 2021, a total of one hundred nineteen documentary films from fifty-six countries were shown to a registered 11,000 viewers. The award-winning film Why Not, a Bangladesh-Korea joint production focusing on comfort women of Korea and rape victims of 1971 liberation war, was shown in the 2021 festival.

Center for the Study of Genocide and Justice

The Center for the Study of Genocide and Justice (CSGJ), established by the Liberation War Museum in 2014, aims to organize and promote research, documentation, study, education and networking on genocide, crimes against humanity and war crimes committed in Bangladesh and other parts of the world. CSGJ works to strengthen the national and global efforts for Genocide Prevention (GP) and the non- violent method of Responsibility to Protect (R2P).

Each year CSGJ organizes month-long certificate course, residential winter school, seminars and public lectures on various issues relating to genocide and mass atrocity crimes. CSGJ conducts research on Bangladesh genocide, as well as other genocides committed in various parts of the world inorder to educate the youth. Since the eruption of Rohingya crisis the research team from CSGJ made various visits to the makeshift camps in Cox's Bazar to collect testimonies from the survivors and came up with several publications.

The CSGJ organizes the International Conference on Genocide and Justice, the last one being held in 2019.

Created in association with a group of Harvard University Asia Center students, and designers, the Thread Exhibit is an online exhibition dedicated to sharing the story of the Rohingya community and lifting their voices to a global audience. The exhibit combines the power of arts and technology to raise awareness of the persecuted Rohingya community.

Regular Programs of the Museum

Impact, Challenges and Reflections on the Future

This year the Museum is observing the 25th anniversary of its establishment. This private museum has over the years become a people's institution and this strong bondage with the community is the source of its strength. With the construction of a new building, the Museum has offered to many more people its services. The Museum can undertake different programs because of the voluntary involvement of people from various sectors including the youth. The Trustees have initiated a journey with limited resource at a rented place and now with the construction of the permanent house, a dream has been fulfilled. It is imperative to give it a solid foundation. The Museum has established links with similar institutions and efforts in the region and beyond. It is ready to offer its services to willing partners and make it another hub of memorialization and peace activity in the region.

The challenge lies in creating this strong bond and in handing over the Museum to the youth of today, so that the memory becomes inter-generational and the journey towards building a better future for all continues.

Mofidul Hoque is the Founder-Trustee of the Liberation War Museum and the Director of its Center for the Study of Genocide and Justice.