On 21 August 2022, HURIGHTS OSAKA participated in the Summer SDGs Festival for Youth organized by the Kansai NGO Council, as one of the non-governmental organization (NGO) members providing information to participating secondary school students.

The Kansai NGO Council has the main objective of promoting a cooperative relationship among NGOs which work on development, human rights, and environment issues in the Kansai area. For the past eight years, the Council has been holding an annual festival, "One World Festival for Youth," which aims at encouraging the younger generations to take action by having secondary school students as festival organizers. Due to the COVID-19 pandemic, the past few festivals had taken place online, where only limited contents were made possible. This year's "Summer SDGs Festival for Youth" therefore brought back the booth exhibition component that allowed a face-to-face interaction. According to the Council's Secretary General Yoshinori Kurita, the term "SDGs" was put into the title since they found it was something the society had a shared recognition and interest of, which many actors could use as a key-term for discussion.

On the day, five secondary school student groups and seventeen organizations (most of them NGOs) took part to share their own work and researches for both a learning and connecting opportunity. Unfortunately, only a small part of the total available spaces were filled for the participants, partly due to the rising COVID-19 cases. On the other hand, it was pointed out that this also meant that each student could spend longer periods on each booth, having a more in-depth interaction with each organization or group, and ultimately getting a higher rate of satisfaction.

As one of the participating NGOs, HURIGHTS OSAKA used this opportunity to share human rights information through the theme of the Sustainable Development Goals. One of the important messages it wanted to deliver was the fact that human rights were at the soul of the seventeen goals and the one hundred and sixty nine targets. Based on this, a display panel and two sets of quizzes for the students to take part in were prepared. The quizzes focused on issues which especially related the SDGs to human rights, such as the problem of hate speech (Goal 10 Reduced Inequalities), rights and production of goods (Goal 12 Responsible Consumption and Production), and the appalling ranking of the Japanese global gender gap index (Goal 5 Gender Equality). The quizzes not only made the booth visits interactive, but also added information to the secondary school students' understanding of both SDGs and human rights. For example, many still assumed that issues such as LGBTQ rights and the abolition of nuclear weapons would be in one of the listed one hundred and sixty nine targets, highlighting the importance of accurate knowledge of concepts that are to be tackled. 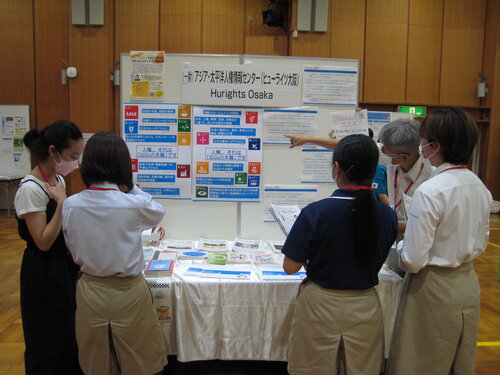 In the recent years, the concept of SDGs has become a popular educational topic in Japan, while I feel human rights education is not enough in many instances. Thus, through designing the quizzes, my intent was to have the students bring home some kind of knowledge or awareness by having the SDGs as a trigger. Mr. Kurita had commented a similar observation upon reflecting on the whole session; that since the theme of SDGs had become a way of putting the different goals and issues together in one space, the student participants had a chance to be exposed to not only the goals they were originally interested in, but also to ones that they were not. Where school education cannot satisfy all the needs of awareness-raising and education, it is hoped that opportunities such as this festival motivate more of the younger generation.