On 23 May 2022, Professor Kinhide Mushakoji passed away. He lived well his ninety-two-years of life, a significant part of which as a human rights advocate.

In a 2019 interview,1 Professor Mushakoji explained his personal background that influenced his future involvement in peace, development, human rights and other issues.

Born to a French-Japanese mother, he experienced difficulty when he came to Japan at seven/eight years old from Belgium. He was speaking the French language before he was able to speak the Japanese language well. He was bullied in school for not being pure Japanese. He was a Catholic and became very active in the Catholic student movement in Japan. During a visit to India while he was a university student, he contacted people involved in the Afro-Asian Solidarity Movement. He became involved in the peace movement in Japan but he combined his view of peace with Afro-Asian Solidarity Movement perspective. He worked with different Christian groups on the issue of "development," which was seen as another name for peace.

He also became active in the anti-discrimination movement of the Buraku people in Japan.2

He took the stand that he was not "for the West but for the rest" and while he was a Catholic/Christian, he was not in favor of Christians monopolizing religious truth.

By 1970s, Asian intellectuals and activists became actively working on several issues, including human rights, at the regional level. Professor Mushakoji became involved in organizations that worked on regional issues. He was involved in the establishment of the Asian Cultural Forum on Development (ACFOD) in early 1970s. He worked with Sulak Sivaraksa of Thailand, Muto Ichiyo of Japan, and likely with Fr Edward John Curnow of New Zealand, Fr Satinislaus Fernando of Sri Lanka, Bishop Julio Labayen of the Philippines, and Abdurrahman Wahid of Indonesia.

He was a fellow of the Asian Regional Exchange for New Alternatives (ARENA), established in Hong Kong in 1983, a "regional network of concerned Asian scholars - academics, intellectuals, activists, researchers, writers, and artists - which aims to contribute to a process of awakening towards meaningful and people-oriented social change."3

In 1993, in preparation for the establishment of an Asia-Pacific human rights center, Professor Mushakoji visited Bangkok and Hong Kong as part of a group from Osaka to consult with regional organizations. Professor Dong-hoon Kim of Ryukoku University,4 Kenzo Tomonaga (then Director of the Buraku Liberation Research Institute) and representatives of labor and religious organizations were part of the group. The group met with people in ACFOD, Thai organizations, and UNESCO in Bangkok, and ARENA and other groups in Hong Kong.

After the ACFOD meeting, Professor Mushakoji stayed behind to discuss further with the ACFOD staff on what they thought about such center for human rights. He was as usual very open and appreciative of the views expressed by the ACFOD staff. 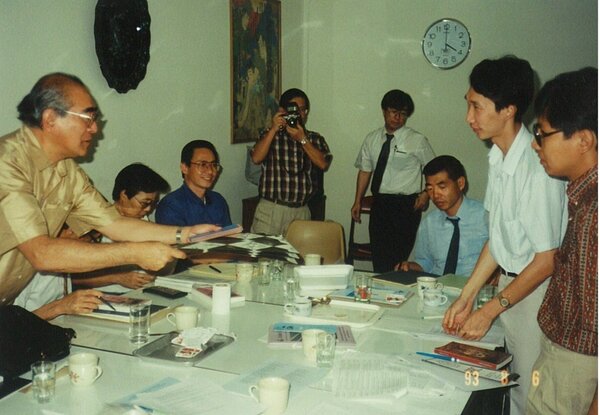 Professor Mushakoji was the first Chairperson of HURIGHTS OSAKA. During the opening ceremonies of HURIGHTS OSAKA in December 1994, he spoke about "endogenization of human rights in the Asia Pacific" by valuing endogenous human rights traditions in different cultures and historical contexts.5

He also participated in the activities of HURIGHTS OSAKA particularly in its regional human rights education project. He contributed a manuscript entitled "Japan and Cultural Development in East Asia: Possibilities of a Human Rights Culture" included in the book Human Rights in Asian Cultures: Continuity and Change (1997).

"Musha," as he was called by some of his colleagues in the regional networks, was known for his sense of humor. But he was also known for his humility and capacity to interact with people from different groups and countries in Asia and the Pacific.

Jefferson R. Plantilla is a researcher at HURIGHTS OSAKA.

1 Mushakoji Kinhide - Interview, Global University for Sustainability, YouTube, 26 November 2019, www.youtube.com/watch?v=m4UAhgMLkK8.
2 He became an Adviser of the Buraku Liberation Research Institute (which was renamed Buraku Liberation and Human Rights Research Institute) and Co-Chairperson of the International Movement Against All Forms of Discrimination and Racism which is supported by the Buraku Liberation League.
3 Asian Regional Exchange for New Alternatives, http://arena-council.org/arenac/en/.
4 Professor Kim became the first Director of HURIGHTS OSAKA.
5 Kinhide Mushakoji, "The Universality of Human Rights - endogenization of human rights in the Asia-Pacific region," HURIGHTS OSAKA Newsletter, volume 1, 28 February 1995, page 5, available at www.hurights.or.jp/archives/focus/section1/1995/02/.