The 51st General Assembly on Buraku Liberation Research, held in Osaka city on 6-8 November 2017, focused on supporting the implementation of the 2016 Act on the Promotion of the Elimination of Buraku Discrimination (APEBD), and promoting cooperation for the elimination of all forms of discrimination and the establishment of legal systems on human rights. The 2017 conference dealt with the developments on measures taken to address the discrimination against Buraku people.1 More than 5,000 people participated in the conference including local government officials, members of the prefectural parliament, educators, representatives of corporations, members of labor unions, representatives of Buraku liberation communities, researchers, activists, members of religious organizations, and students. Following are summaries of two sessions on issues regarding APEBD.

He noted that the discrimination against the Buraku people was one of the biggest human rights issues in Japan that had not been sufficiently dealt with by the government (including local governments) after the expiration of two special measures laws in March 2002.2 As a result, people lost interest in Dowa policies and lacked knowledge in dealing with Buraku issues as shown in the 2012 “Opinion Survey Regarding Human Rights.”

Regarding APEBD, he stressed 1) the need to recognize the basic reasons of the law, 2) the limitation on the effectiveness of the law due to the fact that it only provided for legal principles, and 3) the explicit declaration of the existence of Buraku discrimination and the duties of national and local governments on the problem.

In conclusion, he noted that solving the Dowa problem would lead directly to the improvement of the state of human rights in Japan as a whole, and suggested concrete community development strategies based on social inclusion.

Future Challenges
Fujihiko Nishijima, the Secretary-General of the Headquarters of the Buraku Liberation League (BLL), explained the progress on the legal steps taken since 1965 when the Dowa Policy Council Report3 was released. He also discussed the background and contents of the report of Human Rights Protection Council (founded in 1997) and how the "Human Rights Protection Bill and the draft Bill on the Establishment of the Human Rights Commission" based on this report were once decided upon and then withdrawn by the Cabinet.

He further explained the actions at the Diet (parliament) that led to the enactment of APEBD in December 2016 and the concrete developments since then.

He also pointed out that, beyond legal principles toward the promotion of Buraku liberation, there should be thorough public awareness-raising efforts about relevant policies, and appropriate measures enacted by prefectural assemblies and adopted by the local governments. He suggested several measures to help implement the law such as lobbying local governments to adopt good practices on addressing discrimination against the Buraku people, adopting guides on how to lobby the Ministries using Articles 4, 5, and 6 of the law, and suggesting guidelines for lobbying political parties and the government.

Finally, Mr Nishijima showed the materials of BLL on how to participate in the hearings of relevant Ministries regarding Article 6 of APEBD. 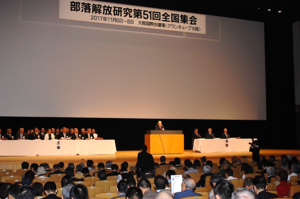 Kazuo Yamawaki is the Vice-President of HURIGHTS OSAKA.

Endnotes
1. Read the “Buraku Problem Q & A” of the Buraku Liberation and Human Rights Research Institute for more information on the discrimination against Japanese called Buraku people, www.blhrri.org/old/blhrri_e/Q_and_A/question.htm.
2. Act on Special Measures for Dowa Projects and the Act on Financial Measures for Area Improvement, both were enacted in 1969.
3. See “Buraku Problem Q & A” for more information on the Dowa Policy Council Report, www.blhrri.org/old/blhrri_e/Q_and_A/A012.htm.