For decades, forced child and adult labor was the scourge of Uzbekistan's cotton sector. The Uzbek government presided over the world's largest mobilization of forced labor with some two million children and adults forced to go to the fields under harsh conditions, often resulting in death and injury.

State-sponsored forced labor in Uzbekistan's cotton fields did not happen in a vacuum. It was a symptom of a deeply authoritarian regime that controlled every aspect of civic life. This still holds true to a large extent and explains why forced labor persists in other sectors in Uzbekistan, including in the silk sector.

The state-sponsored abuse of children and adult workers in the cotton fields led to an international campaign starting in 2007 that saw Uzbek cotton boycotted by dozens of the world's leading brands and retailers, including H&M, Zara, Walmart and many more.

The death in 2016 of dictator Islam Karimov, who ruled Uzbekistan with an iron fist for some twenty-five years, ushered in a new era of reforms under his successor, Shavkat Mirziyoyev. Among the reforms was a commitment to end the use of forced labor in the cotton fields. His ambitious reform program, focused mainly on the economy, transformed the country and ultimately led to the elimination of government-imposed, systematic forced labor in the 2021 cotton harvest.

This was the moment human rights defenders who had campaigned1 for years to end the system, often at great personal risk and sacrifice, had been waiting for. Much as there was to celebrate, Uzbek Forum's findings of the 2021 harvest2 warned of remaining risks and challenges that must be addressed to ensure that the progress made to date is sustainable. Until then, brands and retailers who are bound by responsible sourcing commitments are likely to stay away.

The Campaign to End Forced Labor

In 2009, Uzbek civil society activists launched a petition calling for a boycott of Uzbek cotton to raise awareness of the scale and impact of the abuses. By this time, several brands had already banned forced labor and Uzbek cotton in their supply chains. Many other brands followed the call by civil society and in 2010,3 the Cotton Campaign, an international coalition of non-governmental organizations (NGOs), academics, investors, industry representatives and international trade unions, consolidated these efforts by launching the Uzbek Cotton Pledge.4

The Pledge attracted more than three hundred and thirty brands and retailers which publicly committed to not use Uzbek cotton in their products as long as it was produced with state-orchestrated forced labor.

The boycott and the Cotton Campaign's accountability actions forced the Uzbek government to stop forcing children to pick cotton in 2014, but the forced labor problem continued, accompanied by arrests and retaliation against human rights defenders.

The Cotton Campaign lifted the Pledge in March 2022 based on Uzbek Forum's monitoring findings that concluded that no government-imposed, systematic forced labor had been used during the 2021 harvest.

The ILO also played an important role in the long road to eradicating forced labor in the cotton fields. In 2013, in response to a formal complaint5 to the World Bank's inspection panel, the latter concluded an agreement with the ILO to conduct "third-party monitoring" to monitor child and forced labor in Uzbekistan's cotton sector, which lasted until 2021. The ILO monitoring in the early years, conducted jointly with the state-controlled Federation of Trade Unions of Uzbekistan, could not find signs of "systemic or systematic child and forced labor in Uzbekistan, and even coined the special term "reluctant laborers." This despite the fact that until 2017, most colleges and universities were closed while students were sent to the fields for two months. The ILO subsequently reported improvements in its methodology and engaged independent activists to conduct monitoring. 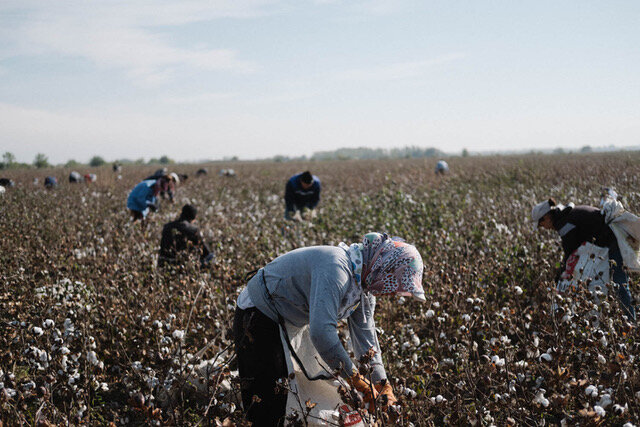 One of the most important remaining challenges is the question of independent monitoring and reporting on labor rights violations in a country without independent trade unions and a dire lack of civil society organizations. While the media landscape has seen a marked increase in the number of online media outlets and bloggers, civil society remains constrained by a state which is still deeply distrustful of initiatives which are not under the control of the government. Although the country boasts some ten thousand registered civil society groups, the vast majority of these groups are quasi-NGOs or GONGOs (groups that are overseen by or affiliated with the government). Grassroots activists face enormous bureaucratic hurdles to register as NGOs and in June 2022, the government passed a decree that requires NGOs in receipt of foreign funding to work with government agencies which would be able to oversee and even intervene in their activities.

The Federation of Trade Unions of Uzbekistan (FTUU) is a government-controlled body whose head, although formally elected, is actually appointed by the President. High positions at the FTUU are often filled by government ministers who have been demoted from other posts. This was the case with Zainilobiddin Nizomiddinov who was head of the Presidential Administration until he was recently "elected" as Deputy Chairman of the Council of the FTUU following the political and social unrest in Karakalpakstan in July 2022.

There were no independent trade unions in Uzbekistan until March 2021 when workers at Indorama Agro, a cotton textile producing company in Syrdarya region, organized6 Uzbekistan's first democratically elected trade union amidst serious labor rights violations and mass redundancies. It was a historic moment and one which tested the limitations of the government's commitments to freedom of association as well as the determination of workers. In order to maintain its independence, the union was required to register with the Ministry of Justice. However, following intimidation7 of union members by the authorities, union leaders opted to become part of the FTUU in order to address pressing labor rights issues, rather than risk delay through a lengthy and bureaucratic registration process. The union has thus far managed to resist further attempts to undermine its leadership and has even secured some victories along the way. Despite attempts to subvert legitimate union election procedures, workers were finally able to elect a new leader following high level intervention.

In a country with a population of thirty-four million, there are only a handful of activists with the relevant skills, experience and resources to conduct independent monitoring and reporting on labor rights violations. This raises serious questions for companies wishing to source Uzbek cotton without the risk of violating their own ethical codes of conduct and increasingly stricter supply chain laws.

The media also plays a crucial role in informing society of human rights issues. However, despite the significant increase in media freedom under President Mirziyoyev, there have been serious violations of freedom of speech which call into question the ability of the media to take up this role. Bloggers and journalists have found themselves increasingly under pressure to self-censor and in some cases have been detained, intimidated and imprisoned.8 There is increasing concern that President Mirziyoyev's much lauded commitments to human rights are back-sliding. Social media has been subject to blocking and disruption, although most recently, the authorities took the step of unblocking Twitter, which, ironically, had long been the preferred social media platform of Uzbek ministries and government officials. This selective censorship of the media has made it increasingly difficult for journalists and bloggers to gauge what is permitted and what can land them behind bars.

The privatization of the cotton sector was intended to revitalize it with foreign direct investment and eliminate some of the underlying drivers of forced labor, such as the government-imposed quota for cotton production and government involvement in the oversight of the harvest. However, the transition has created a new form of control over farmers who are now at the mercy of so-called cotton "clusters", privately owned companies which vertically integrate production, processing, and manufacture of cotton textile goods. With usually only one cluster operating in each district, most farmers have no choice over whom they can sell their cotton to.

This lack of choice for farmers deprives them of any bargaining power to secure fair prices and conditions, making them vulnerable to exploitative operators. Farmers report that they are forced to sign blank contracts with no guaranteed prices but with unrealistically high production targets. The state-imposed quota simply changed its mantle. Government officials continue to oversee the harvest, organize pickers and, given their discretionary powers over their communities, can wield disproportionate influence when making requests to the population to "help with the harvest". Indeed, Uzbek Forum's monitoring findings of the 2021 harvest showed that although the vast majority of pickers said they had picked cotton voluntarily, they simultaneously said that they would have "problems" with the neighborhood councils (mahalla) if they had not agreed to go to the fields. Threat of penalty is considered by the ILO to be an indicator of forced labor.9

In many districts, swathes of farmland have been transferred by government officials to cotton clusters10 on the condition of investments and job creation. Thousands of farmers, who lease their land from the state, have been left with only empty promises of jobs and are now without the means to sustain themselves. Most of these transfers were carried out by government officials who coerced farmers11 into signing "voluntary" land-lease agreements which meant they would not be entitled to compensation.

Persistent rights violations, both of workers and farmers, pose serious challenges for brands and retailers and yet provide a unique opportunity for the Uzbek government to demonstrate its commitment to human rights and rule of law.

An enabling environment that embraces international labor standards is the essential element that is thus far missing in the reform process. Without a meaningful and legitimate role for civil society, there can be no confidence for buyers of Uzbek cotton that rights have been respected. In fact, until now, western brands and retailers have been conspicuous in their hesitancy to place their orders.

In order to address these remaining accountability gaps, the Cotton Campaign has developed a responsible sourcing framework12 which offers brands and retailers the assurances they need. This multi-stakeholder approach provides grievance and redress mechanisms, supply chain traceability and raises the bar for labor standards in Uzbekistan in line with its own domestic and international obligations. In contrast to typical auditing and certification schemes, which have often failed to identify serious risks such as forced labor in Western China, the framework for responsible sourcing puts workers front and center of monitoring and reporting on labor rights. Buyers thus have the assurance that monitoring is independent of government or corporate influence and workers can access grievance mechanisms without fear of reprisal. It is a bold proposal that has been met with interest by some of the world's leading brands.

Despite all the challenges, the Uzbek government now has the chance to finally show the world it is no longer a pariah on the world's stage. A lucrative cotton textile sector that respects rights and rule of law has the potential to create thousands of new jobs that are so badly needed in rural regions where many have no other option than to join the ranks of Uzbekistan's hundreds of thousands of migrant workers in Russia, Turkey and Kazakhstan. The international business community and investors have an important role to play in communicating the need for an enabling environment to the Uzbek government. After all, it is in everyone's interests.

Lynn Schweisfurth is a consultant with Uzbek Forum for Human Rights, a Berlin-based NGO dedicated to protecting and defending human rights in Uzbekistan and strengthening civil society. She holds a degree in German and Philosophy from the University of Glasgow and a master's degree in Human Rights and Democratization from the European Inter-University Centre in Venice.