The Asian Human Rights Commission (AHRC) and the Gwangju-based May 18 Memorial Foundation presented the Asian Declaration on 18 May 2019 during the 39th anniversary of the Gwangju Uprising. The Declaration has three major components: right to justice, right to peace and right to culture.1

The Asian Declaration was adopted in 2018 on the occasion of the 20th anniversary of Asian Human Rights Charter: A People’s Charter. It supplements the 1987 Asian Human Rights Charter, which was also jointly launched in Gwangju city by the AHRC and May 18 Memorial Foundation on 17 May 1987. The Asian Charter drew inspiration from the great struggles for freedom in Asia, including the struggle of the Gwangju citizens in 1980.

Need for a New Declaration

Over the past twenty years, the AHRC, the May 18 Memorial Foundation and other human rights activists and organizations promoted the Asian Human Rights Charter by raising human rights issues with governments and the peoples in Asia and urging them to recognize these problems and find ways to effectively resolve them.2

However, not much progress has been achieved over the past two decades. Extrajudicial killings, torture and enforced disappearances that used to occur twenty years ago are still taking place in Asian countries. Extrajudicial killings have taken place allegedly under the leadership of President Rodrigo Duterte in the Philippines, while they may take the form of “enforced disappearances” in Bangladesh, Pakistan, Sri Lanka and many other countries as well.

The implementation of ratified United Nations human rights conventions has been limited in many countries in Asia. Existing national mechanisms to address human rights violations and provide remedy and reparation are seen as ineffective; while other Asian countries do not have such mechanisms.

On the other hand, violence and internal and inter-state conflicts are rampant in Asia.

In light of the situation in Asia, three issues were considered as needing more emphasis in human rights work: justice, peace and culture.

During a period of almost two years from 2017, the AHRC and May 18 Memorial Foundation held subregional consultation workshops in South and Southeast Asia (and one consultation workshop in Geneva) with human rights activists and defenders on the drafting of documents that would supplement the Asian Human Rights Charter. In these workshops, participants discussed the human rights situation (specifically relating to the right to justice, right to peace and right to culture) in their respective countries.

On 17-21 February 2018, a final consultation workshop was held in Kathmandu attended by human rights experts, lawyers and academicians from different Asian countries. The final draft of the Asian Declaration was prepared in this workshop.

The final draft of the declaration was further discussed with a panel of experts and participants during the Gwangju Asia Forum 2018 held in Gwangju city. On 16 May 2018, Mr John Joseph Clancey spoke on the right to justice, Mr Sanjeewa Liyanage spoke on the right to culture, and Ms Sriprapha Petcharamesree, PhD, spoke on the right to peace. Mr. Basil Fernando, Policy and Program Director at the AHRC, chaired this panel discussion.3 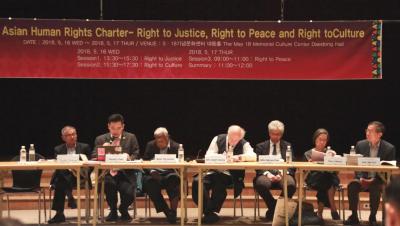 Highlights of the Asian Declaration

The Asian Declaration reaffirms the right to effective remedy in Article 2 of the International Covenant on Civil and Political Rights (ICCPR) in declaring the “Right to Justice.” The “Right to Justice” is meant to stress the need for remedy to human rights violations committed by the state.

The “Right to Peace” addresses the existence of violence and conflicts in the region. The “Right to Culture” recognizes the diversities existing within and among societies in Asia.4

The Asian Declaration calls on State, civil society organizations and other organs of the society to fulfil their obligation to promote peace education and education for peace. It encourages further promotion of the right to cultural diversity by adjusting to changing realities. The Declaration states:5

Cultural diversity is best protected when all other human rights are respected. Culture should not be used as a tool to infringe on the human rights of certain individuals, especially that of women. Cultural identity is important for the well-being and dignity of individuals and communities. No one should be denied rights on the grounds of cultural differences.

The AHRC and the May 18 Memorial Foundation plan to integrate the Asian Declaration into the existing Asian Human Rights Charter: A People’s Charter.

Praveen Kumar Yadav is a human rights researcher from Nepal.

For further information, please contact him by e-mail: iprav33n@gmail.com.