Filipinos constitute the third largest group of foreigners in Japan with almost 250,000 population.1 23,000 of them reside in the seven prefectures of the Kansai region.2

Arrival in Kansai
From early 1920s till early 1940s, Filipino jazz musicians were playing in Kobe and Osaka. Filipino male musicians played in many entertainment places around US military bases in Japan from the 1950s, but in Kansai they started to arrive in bigger number from the 1970s to the 1980s. At the end of World War II, a number of Filipino women married to Japanese men arrived in Kansai from the Philippines (via Nagasaki) with their children. From the 1980s to mid-2000s, Filipino women as overseas contract workers (popularly known as entertainers) arrived in big number. Many of them became spouses of Japanese and started residing in Kansai to raise families.

Supported by the booming economy during the “bubble era” and the revision of Immigration Control and Refugee Recognition Act that took effect in 1990, many Japanese-descent Filipinos along with Filipino technical intern trainees came to Japan to supply labor to the industries in increasing number in the 1990s. Nurses and caregivers started to arrive in Kansai under the Japan-Philippine Economic Partnership Agreement (JPEPA) from 2009. Almost at the same time, Japanese-Filipino children came to reside in Japan along with their Filipino mothers, some of whom were recruited to work in hospitals and caregiving institutions (such as facilities for the elderly). And from 2017, young Filipinos aiming to work in the caregiving industry in Kansai started to arrive to study Japanese language and prepare for caregiving licensure examinations. A few Filipinos arrived in Kansai in 2017 for training on domestic help work before deployment by companies to Japanese households.

On the other hand, since 1980s, Filipinos have been arriving and residing in Kansai as spouses, professionals working in various fields, religious missionaries, and students. There are Filipinos working in international schools in Hyogo and Osaka prefectures; some teach in Japanese public and private universities in Kansai; others teach in English language schools and as Assistant Language Teachers in primary and secondary schools. Some Filipinos who studied in Kansai eventually joined the academe or worked in companies. Filipino religious missionaries (priests, nuns, pastors) work in Catholic and Christian churches in many cities in Kansai; other professionals (engineers or those engaged in technical jobs) come to Kansai for intracompany assignments or for training.

The arrival of Filipinos in Kansai continues due to a variety of reasons – family, education and new employment opportunities.

Living in Japanese Society
Filipinos do not reside as one community in one place in Kansai; they reside in the different cities and towns of the region. Among the  permanent and long-term Filipino residents, many are spouses, parents and in-laws in Japanese (-Filipino) families. There are also  Filipino families living in Kansai, many of whom are Japanese-descent Filipinos.

Japanese-Filipino children born in Japan from late 1980s and early 1990s have grown up and joined the workforce; some have families and children of their own.

Issues
Foreigners in Japan generally suffer from problems regarding the family, school, workplace, and relationships with fellow foreigners and the Japanese.

The Association for Toyonaka Multicultural Symbiosis (ATOMS), which has been providing services to foreign residents in Toyonaka and other cities for the past several decades, lists the major problems sought for consultation by Filipinos in Table 1:3 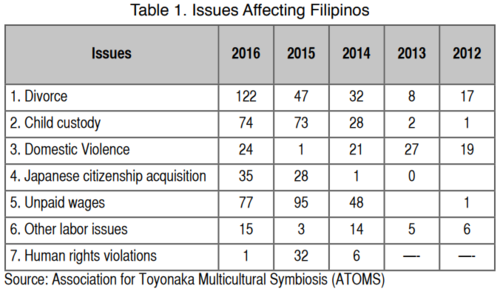 In general, the number of domestic violence cases in Japan rose when the economy was not in good condition;5 and poverty rate among single parent families reached 55 percent in recent years.6

Family-related and economic problems (such as irregular income or unstable employment of the Japanese spouses/ partners) are likely to cause domestic violence against the Filipino wives/partners and children.

Domestic problems in turn lead to divorce. Some divorced Filipinos suffer from lack of financial support for the children from their former husbands/partners. In case they have no children, or do not have custody of the children, they may lose the permission to continue to stay in Japan.

Those who are able to change their residence status and continue to stay in Japan may be deprived of contact with their children if they (children) are in the custody of the Japanese parents.

The approval of the fraudulent divorce application remains valid despite complaint of unauthorized use of hanko or fake signature.8 Affected foreign spouses/partners have to resort to a complicated judicial process to remedy the situation.9

Before 2008, Japanese-Filipino children born outside of wedlock whose Japanese fathers failed to acknowledge them before they were born were not qualified to become Japanese citizens under Japanese law. However, a Supreme Court decision in 2008 declared the relevant legal provision unconstitutional and violative of the international human rights standards.11 The Japanese parliament (Diet) passed a law in the same year revising that particular provision of the Nationality Law based on the decision of the Supreme Court.12

The 2008 Supreme Court ruling and the subsequent amendment of the Nationality Law opened the door for Filipino parents of Japanese-Filipino children (who either have Japanese citizenship or qualified to apply for it) in the Philippines to come and reside in Japan to take care of the children. So-called “foundations” in the Philippines offered to facilitate their visa application as parents accompanying their Japanese Filipino children to live in Japan. They were also promised jobs to support themselves. Some of these  parents were given work in caregiving institutions in Kansai, where they stayed with their JapaneseFilipino children.

Two problems have arisen from this situation: labor exploitation and welfare of the children. A case in Osaka involved long hours of work and numerous deductions from the salary of the parents (mothers). They were even asked to sign a document that exempted the company from any liability in case of death.13 Some of the parents sued the company in court for damages, which ended with a settlement agreement.14

(1) Lack of Japanese language proficiency that affects communication with others and learning capacity;
(2) Maintaining relationships with schoolmates who have “unfriendly attitude” to them, keep distance from them after knowing each other, have different ways of getting along as friends, and in some cases bully them or express prejudice against them;
(3) Due to inadequate Japanese language ability, uncertainty about academic future after lower secondary school (junior high school), or worry about capacity to enroll in preferred university course even if they can enter upper secondary school;
(4) Confusion on the different school cultures and rules in the Philippines and Japan leading to actions that are allowed in the Philippines being considered violations of Japanese school rules; some also feel pressured by the strict rules in Japanese schools;
(5) New family environment such as living with parents they had not grown up with and the need to work parttime to help support the family (or themselves) affect their studies;
(6) Use of Filipino and Japanese languages has not led to mastery of any language while learning the Japanese make them lose their proficiency in Filipino and English languages that eventually lead to communication gap with their parents;
(7) Negative view of the Philippines may cause them to hide their Filipino identity, while those who see their Filipino ancestry positively have less worry being so identified. Some of them have trouble following two value systems - Filipino and Japanese.

Older long-time resident Filipino women in Kansai recognize the limitation brought by their inability to read and write in Japanese. Though the jobs (low-paid, part-time work) available to them do not match their academic credentials, they still consider them important. Some have to work to support themselves and/or their family (in Japan and also in the Philippines). Some Filipino spouses/mothers work as the sole income earner in the family because of sick, irregularly employed or deceased Japanese husbands/partners. These women also have to contend with the often negative stereotypes about Filipino women that circulate in Japanese society.16

Other Issues
Filipinos who come to Kansai under the Technical Intern Training Program (TITP) are deployed in companies in the different prefectures of the region. Many of these Filipino trainees (officially called technical intern trainees) seem to be working in small- and medium-sized companies. There are reports of abuses by the companies in terms of salary deductions, overtime pay, and working conditions (including long working hours and lack of safety in the workplace). In addition, they have to pay the high cost of accommodation and other needs (electricity and water costs).17

Filipinos who come to Japan to study Japanese language (and caregiving for eventual work in the caregiving industry) can be abused by the “shool” administrators by requiring them to work in order to pay for their supposed expenses. In one case in Kyoto, several Filipinos who paid for their travel to Japan to study were deployed to work beyond the allowed number of hours of part-time work for foreign students. They were also charged high fees for accommodation (15 people in one house) and other costs.

Responses to the Issues
The drastic reduction of the number of entertainer visas issued to Filipinos did not address the exploitation issues (ranging from labor to trafficking problems) that affected them. Neither has there been adequate prosecution of those who committed the abuses in Japan against the entertainers.18

From the 1980-1990 period (when exploitation of entertainers was given more attention) to the present (when issues about Filipinos residing in Japan on long-term or permanent basis are the focus), a number of Japanese NPOs (non-profit organizations) and international centers have been extending support to Filipinos in Kansai. They provide a number of services from consultation service (personal visit or by telephone) to legal and other forms of assistance.19 Filipinos and their children also avail of local government-operated shelters for victims of domestic violence.20

Filipino individuals, communities and organizations provide various types of support to those in need of help; the Philippine Consulate- General in Osaka provides help through its Assistance to Nationals (ATN) program while the Philippine Overseas Labor Office (POLO) in Tokyo provides service to Filipino contract workers including trainees in Japan.

There is still much work to do to stem the tide of issues facing the Filipinos in Kansai. Largely unexpressed in public, Filipinos see the underlying discriminatory attitude against foreigners in the Japanese society as a factor to consider.

Jefferson R. Plantilla is the Chief Researcher of HURIGHTS OSAKA.