They are all members of the Pacific Community (SPC), whose “focus is on major cross-cutting issues, such as climate change, disaster risk management, food security, gender equality, human rights, non-communicable diseases and youth employment.”1 They are also member-states of the United Nations, and have ratified or acceded to some of the human rights treaties as shown in Table 1.

The discussion below on the human rights situation in the Pacific Small Island States is based mainly on the Universal Periodic Review (UPR) reports adopted by the United Nations (UN) Human Rights Council, and on one human rights national action plan.

While many issues were covered in the government reports of the eleven Pacific Small Island States and raised by member-states during the interactive dialogue of the UPR, only a few issues are discussed below.

The latest UPR sessions on the Pacific Small Island States occurred during the 2014-2016 period.

Table 1. Ratified/Acceded to Human Rights Treaties (as of 9 August 2017) 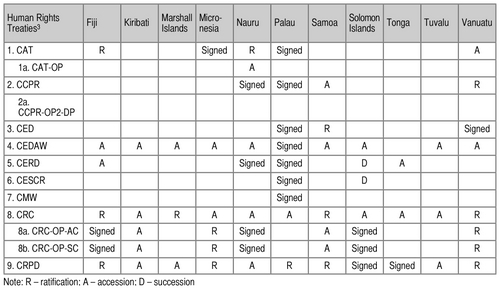 Fiji4
During the 29 October 2014 review of the human rights situation in Fiji by the Human Rights Council, the Fijian government delegation reported that a “comprehensive and very progressive Bill of Rights had been created which allowed for the realization of socio-economic rights as well as civil and political rights.” Also,5
The Minister for Justice said the Fijian Parliament had approved a bill to remove all references to the death penalty in military laws, and therefore abolishing the dea[th] penalty from all national legislation. Fiji was aware that there were patriarchal notions of power relations as well as challenges in tackling violence against women at the legislative and community levels. However, huge progress had been made in establishing a legislative framework for addressing violence against women, including new legal provisions for the offences of rape and sexual assault based on the Australian model as well as domestic violence and child abuse. Fiji encouraged civil society to undergo legal training on the effective implementation of the laws, which were designed to remove discrimination and violence against women.
Two member-states expressed concern about restrictions on freedom of expression under the Constitution, while one member-state noted the restrictions in the Media Decree and the impact of the Public Order Amendment Decree on the exercise of freedom of peaceful assembly. Part of the government response to the issue is as follows:
While guaranteeing freedom of speech, expression, thought, opinion and of the press, the Constitution explicitly prohibited any speech, opinion or expression that was tantamount to war propaganda, incitement to violence or insurrection against the Constitution, or advocated hatred based on any of the  prohibited grounds of discrimination, which included race, culture, ethnic or social origin, sex, gender, sexual orientation and gender identity, language, economic, social or health status, disability, age and religion. Those limitations were also in line with general recommendation No. 35 of the Committee on the Elimination of Racial Discrimination on combating racist hate speech.
The Fijian government officials also reported on new initiatives related to human rights including updated provisions in the Crimes Decree for the offences of rape and sexual assault, the implementation of the Domestic Violence Decree, judicial training, a new National Gender Policy and gender training for civil servants.

Kiribati6
During the 2015 UPR session, the government delegation of Kiribati reported on the implementation of the “National Approach to Eliminating Sexual and Gender Based Violence: Policy and Strategic Action Plan” and the existence of “SafeNet, a committee that comprised government ministries, non-governmental organizations (NGOs) and faith-based organizations providing front-line services to victims of domestic violence ... in most islands of Kiribati.” The Children, Young People and Family Welfare Policy, aimed at protecting children against abuse, violence, neglect and exploitation, was adopted. Kiribati criminalized domestic violence through the Family Peace Act 2014 (Te Rau N Te Mweenga Act) and established the Ministry of Women, Youth and Social Affairs. The Kiribati Constitution was amended to prohibit discrimination based on race, colour and national origin.
The government delegation of Kiribati highlighted climate change as the major challenge faced by the country. The delegation explained that as
a nation of low-lying islands, with an average elevation of only 2 metres above sea level, climate change and the resultant sea-level rise had added new and major challenges for Kiribati, including loss of territory, severe coastal erosion and involuntary displacement of communities, affecting food and water security. More importantly, it had become an issue of survival for the people of Kiribati.
Aside from the frequent mention of sexual and gender-based violence by member-states during the interactive dialogue of the UPR, other issues raised included the reintroduction of the death penalty, protection of  the rights of persons with disabilities, the strengthening of the Kiribati National Human Rights Task Force (established in 2014), and the broadening of grounds for prohibiting discrimination in the Constitution.