The continuing flow of people crossing national borders in order to flee from  persecution, armed conflict and other hardships has raised issues beyond obtaining safety and security. One question is on these people’s survival once they find a place of refuge. Will they be able to find the means to support themselves and rebuild their lives while staying in other countries as refugees?

A roundtable meeting on the link between business, human rights and refugees that was held in Seoul on 8 June 2016 stressed the importance of providing support to refugees in their country of refuge.

Professor Yasunobu Sato of The Human Security Forum, Tokyo University, explained that the meeting was the second activity held on the link between business, human rights and refugees. He was referring to the meeting held in the Philippines on 30 January 2016.1 The January 2016 meeting was attended by representatives of non-governmental organizations and the academe in the Philippines, and a delegation from Japan.

The Seoul meeting continued the “conversation” with the presentations on business and human rights initiatives and projects that addressed the socio-economic needs of refugees. Mr Pillkyu Hwang of the Korean Public Interest Lawyers Group (GONGGAM) introduced a network of Korean non-governmental organizations working in various fields including: human rights and corporate social responsibility; energy/climate policy; and labor rights. This network, Korean Transnational Corporations Watch Network (KNTC Watch), researched on human rights abuses involving Korean companies operating in the Philippines, China, Indonesia, Bangladesh, Sri Lanka, Burma, Laos and Vietnam. It also researched on possible civil and criminal complaints that could be filed against Korean companies. It has filed a complaint before the Korean National Contact Point (and also those in Netherlands and Norway) regarding the displacement of forest dwellers in Orissa, India by POSCO India. It also held dialogues with company officials to address complaints regarding workers and members of communities affected by company operations. Mr Hwang noted the problem of successfully litigating cases against companies, and the need for diverse tactics to address issues related to companies. He cited alternative courses of action (for example, networking with other non-governmental organizations doing similar work) as necessary in taking action on companies.

Mr Jefferson R. Plantilla of HURIGHTS OSAKA introduced the business and human rights project of the Northeast Asia member-organizations of the Asian Consortium for Human Rights-Based Approach to Access to Justice (HRBA2J-Asia). He explained the start of the project with a research on the situation in four Northeast Asian countries (China, Japan, Korea and Mongolia) regarding access to justice and company operations. The research project was finished in 2014,2 and another project on training manual on business and human rights was immediately launched. The training manual, entitled Business, Human Rights and Northeast Asia – A Facilitator’s Manual, focuses on the third pillar of the United Nations “Protect, Respect and Remedy” Framework, makes use of materials in the research report (different cases involving Northeast Asian companies and the efforts of company workers and members of affected communities to address these issues were included as training materials) and cites experiences in Asia that illustrated the different aspects of the remedy pillar.
Mr Brian Barbour of Japan Association for Refugees presented possible areas of engagement for the Asia Pacific Refugees Rights Network (APRRN) in relation to business, human rights and refugees. He said that the APRRN has two hundred non-governmental organization-members in Asia and the Pacific involved in different areas of work on refugee issues.

He stressed that refugees and asylum seekers are vulnerable to abuse and exploitation because of their often precarious legal status in this region.

He cited the challenges involving the power imbalance of global corporations with resources that often outpace States. He also noted, however, the opportunity provided by principles of corporate social responsibility, and pro bono. He listed several ways of using corporate support:

− Holding of job fairs for refugees and asylum seekers;
− Providing in-kind assistance and goods;
− Pro bono projects involving law firms, annual pro bono legal aid trainings, mentor-mentee systems, and partnering with in-house counsel;
− Marketing and branding of initiatives that support refugees and asylum seekers can sometimes be supported by the expertise that corporations have; and
− Translation support (for legal documents, annual reports).
Professor Yasunobu Sato discussed the program of the Compilation and Documentation on Refugees and Migrants (CDR) of the Research Center for Sustainable Peace at the University of Tokyo. He briefly reviewed the projects of the CDR, including the continuation of the development of database on country of origin information (COI).

He also presented UNIQLO’s “Fast Retailing Refugee Support Program,”which aims to contribute to the permanent solution on the refugee problem through programs related to business. UNIQLO signed a "global agreement” with the United Nations High Commissioner for Refugees (UNHCR) in 2011 regarding support for refugees, the first Asian company to do so. 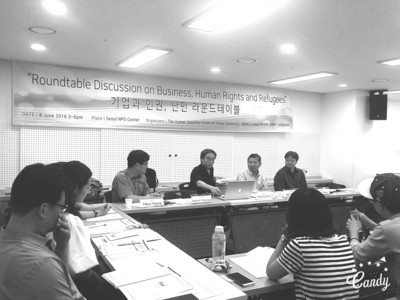 Under the Help for Self-support component, UNIQLO hired those with refugee recognition status in Japan as store employees. There are currently twenty refugees working in UNIQLO stores in Japan. There is a follow-up support program to help refugees work well with Japanese colleagues and develop their career in UNIQLO.

To increase the public’s awareness of the refugee issue, UNIQLO has been holding campaigns during the World Refugee Day (June 20). It shows movies and exhibits photos regarding refugee issues at its stores. It provides information on refugees through the internet, television and newspapers.

UNIQLO’s store managers visit schools to introduce its recycling project. They discuss the refugee situation and how the recycling project can help refugees. Students are encouraged to join the project and collect clothes. During the last three years, 56,500 students have joined the project from four hundred sixty-five schools and collected 215,000 pieces of clothing.

He also discussed the Japan for UNHCR that he headed and its social enterprise project. The Association was establishing a coffee company with the aim of training refugees to become company heads. The project consisted of putting up coffee stalls in sport stadiums/schools/hospitals that would be managed by refugees. The Association also engaged with business institutions to make them invest on the refugee issue. It received the support of professional staff (e.g., Goldman Sachs), who provided advice on how to establish companies and develop markets. A non-governmental organization was created to guide the management of the coffee company and funds would be raised through direct investment and “cloud funding.”

He stressed the need for more engagement with business to support the refugees. This effort should not be limited to raising funds but extended to raising awareness of the private investors on the refugee issue.

He raised the idea of burden sharing for the Syrian refugees through several means:

a. For the Japanese government
1. Expand traditional resettlement arrangement by also providing employment and educational opportunities;
2. Consider the support for refugees as investment for future business opportunities; and
3. Provide over several years legal entry for Syrian refugees as trainees;
b. For companies, provide more employment opportunities in addition to giving funds.

He said that refugees were being exploited with the lowest paying job and bad working conditions, as in the case of refugees in the United States. However, he also saw the possibility of having the companies’ role in increasing awareness of the refugee issue.
Representatives of Refuge pNAN, a Korean non-governmental organization, explained the organization’s assistance to refugee program.
Representatives of Korean non-governmental organizations, the UNHCR Seoul Office, and the delegation from Japan attended the meeting.

1 The meeting, entitled "A Continuing Conversation on Business, Human Rights and Refugees," was convened by the Asian Network for Refugee and International Protection (ANRIP), the Asian Consortium for Human Rights-based Access to Justice (HRBA2J-Asia), The Research Center for Sustainable Peace at The University of Tokyo, the NPO Human Security Forum and was hosted by the Ateneo Human Rights Center (of the Ateneo de Manila University School of Law). The meeting was held at the Ateneo Professional Schools, Rockwell, Makati city, Metro Manila.
2 This is the book entitled Bridging Human Rights Principles and Business Realities in Northeast Asia (Osaka/Kuala Lumpur: SIRD/HURIGHTS OSAKA, 2014).