HURIGHTS OSAKA implemented a research project that analyzed Asian laws and jurisprudence from a human rights perspective. The research project involved eight countries in Asia, namely, China, India, Indonesia, Republic of Korea, Japan, Nepal, the Philippines, and Thailand. The research project attempted to determine the extent of incorporation of international human rights standards into the domestic legal system (in terms of laws, government policies and programs, and administrative procedures and mechanisms) and jurisprudence (in terms of court decisions and procedures) to address specific issues in society; and show how far have they been used by the human rights practitioners.

The reports of the research partners have been compiled in one book, entitled Law, Jurisprudence and Human Rights in Asia. The book also includes four more reports, covering an examination of the jurisprudence in Hong Kong relating to the International Covenant on Civil and Political Rights, the impact of the Convention on the Elimination of All Forms of Discrimination Against Women (CEDAW) in Japan, CEDAW and the laws of Islamic countries and communities in Southeast Asia, and lastly a summary paper.
The research reports cover the issues confronting the following: 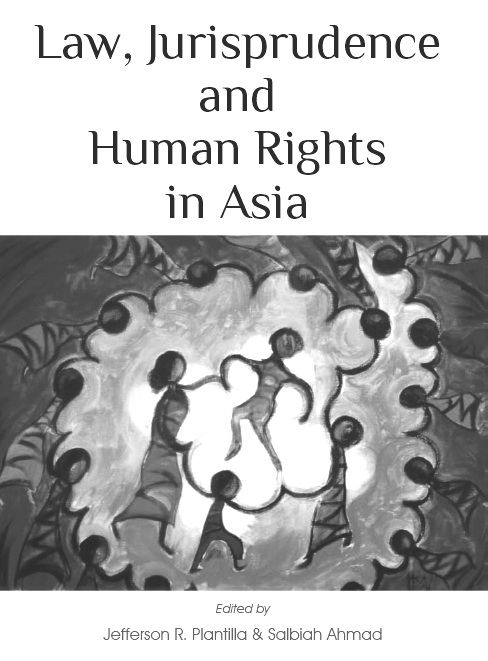 The reports reviewed the issues confronting the different groups of people, the relevant laws that directly affect them, the decisions of the highest courts relating to their human rights, and the factors that facilitate or hinder the protection, promotion and realization of their human rights.
A number of practical measures have been discussed as concrete examples that may apply to other communities or peoples. A number of questions have also been raised that should be useful not only in drafting new laws or amending existing ones, but also in implementing them on the ground.
The final paper sums up from a regional perspective the different components of the varied national experiences, highlighting relevant laws, court decisions and other information relevant to the issues raised by the reports.
The book presents a variety of national contexts affecting the protection, promotion and realization of human rights at the national level. Each report has stories to tell, and practical experiences to learn from. Alongside inspiring stories of laws and jurisprudence that support human rights are discussions of the problems that inhibit proper application of the international human rights standards in domestic legal systems.
A number of court decisions in several Asian countries support the domestic application of international human rights standards.

The Supreme Courts have applied the international human rights standards in different ways:

The Supreme Court of Sri Lanka has applied the international human rights standards by citing the Standard Minimum Rules for the Treatment of Prisoners.5 It states that

Considering the Rules contained in the Prisons Ordinance and the Standard Minimum Rules for the Treatment of Prisoners adopted by the first United Nations Congress,6 it is quite obvious that the Prison Officers are bound not only to perform such duties for the purpose of preserving discipline and enforcing diligence, cleanliness, order and conformity to the rules of the prison, but also to treat the prisoners with kindness and humanity.

In Nepal, the Supreme Court declared that it is the legal and constitutional obligation and duty of the Nepali government to “protect the rights of the child in line with the provisions of the Bonded Labour (Prohibition) Act” and the CRC. It further states that the protection of child-bonded laborers is also the international commitment of Nepal pursuant to Nepal Treaty Act, 1990 and Article 26 of the Constitution of the Kingdom of Nepal.7
The Philippine Supreme Court in recognizing the right of a lesbian-gay-bisexual-transsexual group to participate as a political party in an election declared that its decision is fully in accord with our international obligations to protect and promote human rights. In particular, we explicitly recognize the principle of non-discrimination as it relates to the right to electoral participation, enunciated in the UDHR and the ICCPR.8
It also explained the necessity of applying the international standards:

[F]or individuals and groups struggling with inadequate structural and governmental support, international human rights norms are particularly significant, and should be effectively enforced in domestic legal systems so that such norms may become actual, rather than ideal, standards of conduct.

The Korean report presents a case before the Constitutional Court that clarified for the first time the entitlement of foreign migrant workers in Korea to exercise labor and other rights in recognition of the obligation of the Korean state under international human rights treaties.
On the other hand, the courts may even improve the international standards. As one account states:

Justice Bokhary cited extensively international legal materials when he said that “[i]n the field of human rights, municipal law has often walked in the footsteps of international law – and may in some jurisdictions have caught up with or even overtaken it.”9

The research project reviewed the “spaces” within national laws and jurisprudence in a number of Asian countries that were appropriate (or effective) application of international human rights standards. Because these “spaces” are still at the stage of growth, they should continuously be widened and effectively employed. Human rights practitioners have to continuously push the boundaries of national application of international human rights standards by building on these “spaces” and by overcoming through practical measures resistance to it.

1. For the profile of many of these human rights centers see Directory of Asia-Pacific Human Rights Centers (Osaka: HURIGHTS OSAKA, 2008). The directory is also available at http://hurights.pbworks.com/, or through https://www.hurights.or.jp/english/directory-of-hr-centers.html.
2. Research partners: