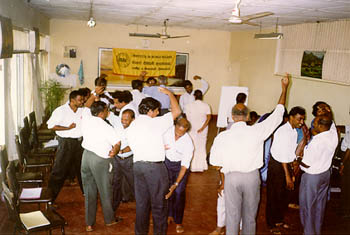 Sri Lanka is a country torn apart for almost two decades between the government and the Liberation Tigers for Tamil Eelam (LTTE) who are fighting for a Tamil "homeland" in the northern and eastern parts of the country. The people of Sri Lanka have witnessed social, political and economic upheaval throughout the whole country. The conflict has caused mass destruction, death, displacement, injury and trauma to countless number of people. Women suffered a lot in this situation. Apart from facing mental stress because of the loss of their husbands, women also face economic stress. Additionally, traditional social-cultural rules and values, sanctioned by the government and the community, make life for an unsupported mother extremely difficult.

The government, NGOs (domestic and international), and other professionals have demonstrated concern for the well-being of groups such as unsupported mothers. The Institute of Human Rights (IHR), based in Colombo, is one of the NGOs working with people affected by the war.

IHR seeks to promote greater awareness and realization of human rights, and to obtain relief and redress for human rights violation victims through legal assistance, advice and rehabilitation. IHR designed workshops with a holistic approach, including human rights education and psychosocial awareness. They deal with coping mechanisms on a practical and emotional level. The concept of the workshops is based on the belief that people's mental well-being is always affected by outside factors, such as environmental destruction caused by natural disasters (like floods and cyclones) and war, in addition to biological and physical deficiencies. /:1:/ The workshops give importance to the mental health and well-being of the individual and the society by sharing, in a positive manner, knowledge and skills that are needed for their development.

The workshops prove that groups working together increase their insight and understanding. They (workshops) are a tool to express mutual understanding and support. They help gain greater understanding of social problems, legal rights, and means of coping with psychological issues.

The workshops therefore highlight the strength of unity among several sections of the community in looking at problems faced and in understanding how to deal with them socially, legally and psychologically.

Discussion and problem-solving are some of the activities used in the workshops.

Focusing on the psychological/psychosocial aspect, the workshops employ the "Me, We and Us" approach. Participants are asked to look into the self, the community and the social institutions. Several themes are covered such as:

Women gain greater understanding of their rights that empower them to take important steps, such as seeking legal advice and not being dependent on the legal processes. The workshops also started to look into their coping mechanisms, enabling women to gain control over their lives. The workshops encourage active participation. Applied Theatre Tools are used. These tools enable all participants to have an equal say in the workshops, and make the workshops more powerful as the participants learn through play and enjoyment. They can also act as a natural healing process that eases psychological trauma.

Lectures about rights are often less effective. Participatory/activity oriented approach where participants examine how to realize rights through sharing of concrete experiences (case studies) is more effective. People who feel disempowered and useless suffer from a low self-esteem. The philosophy of empowering disadvantaged people through programs that encourage active community participation can assist community education and awareness. It can also help reduce conflict and be a way forward to peace.

Evaluation of the workshops by participants shows that the vast majority not only enjoyed the workshops but found the information given and the therapeutic approaches used helpful in overcoming traumatic situations in day-to-day life. It also helps us gain an insight about how we could contribute in reducing conflict and move forward to peace.

Tahirih Q. Ayn is the Rehabilitation Officer of the Institute of Human Rights.