Korean NGOs recently launched a new hunger strike to protest the failure of the Korean government to repeal the National Security Law and to enact a law creating an independent national human rights institution. An appeal to the international community was made by the Korean NGOs on the occasion of the ceremony awarding President Kim Dae-jung the Nobel Peace Prize in Oslo, Norway last December 11, 2000.

On November 27 to 29, 2000, a three-day sit-in protest was held by the Korean NGOs in front of the Myongdong Catholic cathedral in Seoul. The protest attracted a lot of media attention. Then starting on December 1, 2000, the 52nd anniversary of the National Security Law, a dozen leading activists of the National Solidarity for Abolition of NSL started a new hunger strike. They demand the immediate repeal of the law.

The Korean NGOs state the problem in the following manner:

The Korean NGOs believe that the Inter-Korean Summit of June 15, 2000 provides President Kim with a reason for the repeal of the National Security Law. They demanded at that time, at least, the repeal of parts of the law that restrict freedom of expression on those matters considered to benefit "enemy states. " But the government seems to have lost interest on repealing the law. And the ruling party seems to be waiting for a peace treaty between North and South Korea before a repeal of the law is made. Since the government has not taken steps to negotiate the peace treaty, the repeal of the law will take years before it happens. The current efforts by the ruling party (through its Special Committee for the Improvement of Human Rights) to come up with human rights legislations are unsatisfactory to the Korean NGOs. 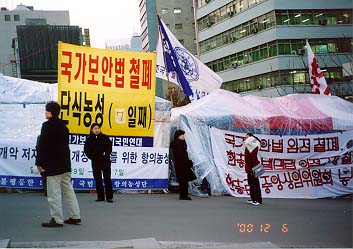 There is no chance for the repeal of the law to occur within year 2000. The National Assembly closed its regular session on December 9, 2000.

The Korean NGOs argue that the continuing existence of the National Security Law threatens anyone who dissents from government policies.

The failure to enact a law establishing an independent national human rights institution symbolizes the resistance of government to be exposed to effective monitoring of its human rights record. As the Korean NGOs put it

President Kim, in his speech during the Nobel Peace Prize awarding ceremony in Oslo, pledged that he will "give the rest of my life to human rights and peace in my country. .. "2 President Kim is being challenged to live up to this commitment.