The Catholic Church is celebrating the 2000th year of Jesus Christ's birth by declaring the period of December 25, 1999 to January 6, 2000 as a "Great Jubilee Year." Jubilee celebration is derived from an ancient Hebrew practice of laying the land fallow, setting the slaves free and canceling debts every seventh year. The Catholic Church adopted a jubilee celebration every 100 years way back in the 14th century. Subsequently, the special celebration has become more frequent in recent times to allow more people to experience the celebration in their lifetime.1

The "Great Jubilee Year" is significant because it promotes an idea that extends well into the field of human rights.

Pope John Paul took the first major step in fulfilling the objectives of the Great Jubilee by asking for the "Lord's forgiveness for the sins, past and present, of the Church's sons and daughters..." on March 12, 2000. His main message is summarized in this slogan: "Let us forgive and ask forgiveness!" He apologized for the sins such as violence against ethnic groups and peoples, treatment of immigrants and Roma people, genetic experiments on the unborn, abuse of minors, treatment of women, treatment of Jews, and treatment of followers of other religions and cultures.

Significant events in world history such as The Holocaust, Crusades (11th-13th century military expeditions to recover the Holy Land from Moslem rulers), Genocide (killing of Latin America's native Americans in the 16th century), Inquisition (16th century secret trials on heresy) were not mentioned but are considered to be included in "sins committed in the service of truth."2

The Pope said that violence should no longer be used in evangelizing.

The Hindu newspaper in India in its editorial of March 15, 2000 stated that the Pope's apology is consistent with his statement during a visit in Delhi in November 1999 that "to wage war in the name of religion is a blatant contradiction." The editorial went on to say that

One factor that facilitated this waging of war was that for most of the centuries the state remained synonymous with religion. The Crusades and Inquisition would not have inflicted such suffering if man had had the wisdom to raise a wall of separation between state and religion. He continues to pay for the absence of that wall.

The Great Jubilee has likewise helped promote the idea of canceling debts of poor countries in order to secure their future. 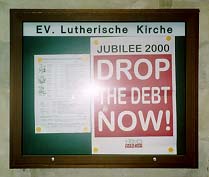 The idea of canceling debts spinned off an international movement that involves various churches and groups around the world. This movement is known as Jubilee 2000 Coalition.

"a one-off cancellation of the backlog of unpayable debt for the world's poorest countries - which either cannot be paid, or can be paid only with enormous human suffering. This wouldn't be setting a precedent for canceling all debts repeatedly. Rather, it would be a once-only gesture to mark the millennium, a gesture showing that creditors and debtors alike have made mistakes and that the slate needs to be wiped clean. The procedure for agreeing [to] this debt relief should be undertaken by an independent body, perhaps under the UN. The procedure will be open, transparent and fair. This would change millions of lives, without taking away the responsibility of debtors to pay their future debts."3

The G-7 countries already discussed this issue in a meeting in Cologne, Germany in June 1999 and came up with a framework for canceling the debts of heavily indebted poor countries (HIPCs).4 All credits provided under official development assistance (ODA) program and up to 90% of non-ODA debts (extended primarily by quasi-governmental organizations such as export-import banks) will be cancelled. The recent G-7 meeting in Okinawa reaffirmed the "commitment to 100 percent debt reduction of ODA claims, and newly commit to 100 percent debt reduction of eligible commercial claims."5

The meeting noted the need for HIPCs to accelerate the process of preparing "comprehensive and country-owned poverty reduction strategies through a participatory process involving civil society" as a means of maximizing the benefits of debt relief.

Free trade system, the dominant economic framework in the world exemplified by the World Trade Organization (WTO), is compounding the situation. In tandem with globalization, the free trade system has been shifting wealth around the world much more quickly. But it also sustained divisions between the haves and have-nots.

Poverty, according to the outgoing chief of the International Monetary Fund, remains the biggest problem. In his address to the UNCTAD meeting in Bangkok in February 2000, he said that

The widening gaps between rich and poor within nations, and the gulf between the most affluent and most impoverished nations are morally outrageous, economically wasteful and potentially socially explosive.

I detect a vigorous call for common action to transform globalization into an effective instrument for development.6

In the same meeting, it is reported that the International Labor Organization Director characterized the process of globalization as the glorification of "casino capitalism" and the imposition of the pains of structural adjustment on the weakest sections of society.7 UNCTAD data reportedly show that the world's 48 poorest nations (33 are in Africa) " are failing to benefit from free trade and globalization and instead face worsening poverty."8

It is reported that developing countries are against the inclusion of human rights (including labor) and environmental issues in the WTO talks. One reason is the fear that developed countries will use these issues to weaken the competitiveness of the developing countries. While this is a likely scenario in a free trade system, this stance conflicts with the view that human rights and environment should not be sacrificed in the name of economic development.

The International Forum on Globalization (IFG) argues that globalization policies lead to a number of negative outcomes, including:

The IFG views international trade and investment agreements, including the General Agreement on Tariffs and Trade (GATT), the World Trade Organization (WTO), Maastricht Treaty, North American Free Trade Agreement (NAFTA) and the Multilateral Agreement on Investment (MAI), combined with the structural adjustment policies of the International Monetary Fund and the World Bank, to be direct stimulants to the processes that weaken democracy, create a world order that is under the control of transnational corporations, and that devastate the natural world.10

The debate on globalization continues while the free trade system remains deeply entrenched. It is thus argued that countries that integrate in the global system reap economic benefits. China is cited as an example of success for attracting majority of the investment money during the past decade. This supposedly contributed to the lowering of poverty level in Asia.11

The issues raised by Jubilee 2000 Coalition and the questions over WTO, IMF and WB are linked to a major human rights concern: existence of a social and international order in which rights and freedoms cannot be fully realized. This is the opposite of what Article 28 of the Universal Declaration of Human Rights provides.

Debt relief will improve the situation for many poor countries. But as the Jubilee 2000 Coalition admits, it will not prevent future unjustified debts from getting incurred again. The only way is to review the present national and international economic systems that breed this problem.

What measures should be taken to create systems that prevent abuse of power to incur debts? How will the needs of people (especially the poor) be addressed in a manner that respects their rights and freedoms?

Debt relief provides an opportunity to examine ways of addressing the poverty issue anew. It also leads to the question of human rights realization. Two issues arise in the process:

a. redressal of injustices, and

b. creation of enabling environment to realize human rights.

How will these issues be treated in the context of Asia-Pacific?

Asia-Pacific countries have not fully addressed the injustice raised by several well-publicized issues regarding indigenous peoples (including the Australian Aborigines), comfort women, and victims of human rights violations under previous authoritarian governments (in the Philippines, Indonesia, Thailand, Korea and other countries).

The failure of governments to take full responsibility on these issues is reflected in the current Asian financial crisis. While the international financial system is equally liable for the crisis, governments tend to blame only the outside causes and fail to look at the critical defects in the domestic economic, social and political systems that likewise caused the problem.

Economic development can lead to the eradication poverty if done with equity and justice. But the governments' doggedness to have prosperous societies at the shortest time possible allows human rights violations. In a highly competitive world, there is no room for dissent or care for the weak who cannot compete. This precisely leads to the objections to globalization. The argument that economic rights should be a priority over other rights is proving to be incorrect.

The reported unrest happening in the rural areas of Thailand and China regarding development projects vividly shows how much negative impact is being absorbed by rural people. There are likewise reports of displacement of urban poor communities in many countries to give space for development/commercial projects. These cases show how unprepared governments and international players are in facing the negative consequences of development projects.

Much of the abuse by international financial institutions, multinational business corporations and the governments regarding development projects stems from the violation of basic human rights. The failure to provide relevant information on the projects to the public in general and the affected (or to be affected) people in particular causes a host of problems - from corruption to sudden and sometimes violent displacement of people. It prevents people from protecting themselves against such violations.

The low priority and support for the replacement of livelihood, or housing, and other social services such as health and education that people lose due to displacement caused by projects violates the right to social and economic security. The protests Indonesian farmers are lodging before the Indonesian government refer to claims about projects that were forced on them by the previous Soeharto government. They have long been suffering. They can claim their right to just compensation and other benefits only now.

In the same manner, development projects that replace traditional means of livelihood such as shift from traditional fishing to fish farming eventually expose the livelihood to greater market fluctuations, and other problems. Failed fish farms leave behind damaged fishing resource due to loss of vegetation (mangroves especially) and use of chemicals for fishpond maintenance. The same can be said of lands that are converted to input-intensive farms or plantations. The poor are hardly protected against such risks.

Redress mechanisms will not be effectively used if people are weakened by the impact of development projects. Loss of income or source of livelihood can prevent them from seeking remedies. How many of these problems have been properly brought to the attention of relevant government agencies? And for those cases that received such attention, how many have been given appropriate remedies? 12

While these questions may exceed the coverage of the present debt relief program, they nevertheless stress the seriousness of the problems brought about by debt-supported development projects.