Human Rights Education for the Police and Military: A Government and NGO Experience 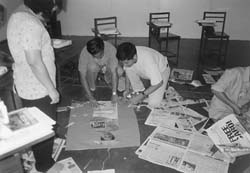 Richard Pierre Claude, the eminent human rights educator from the University of Maryland, once wrote that human rights education is probably the best export product developed by Filipinos. Being a human rights educator, I cannot but agree. The Philippine experience in HRE has been the object of curiosity and a source of fascination for other countries that have been looking for a way to impart human rights values and principles to the most vulnerable groups. And the approach that it has developed, in particular, its human rights seminars for the police and the military, has won international recognition from the UNESCO which gave it the Prize for Human Rights Education in 1994.

Since 1987, HRE has developed into a major joint activity of the Philippine Commission on Human Rights (CHR), and the Department of Education, Culture and Sports (DECS), and human rights NGOs.

It has not always been so. With the restoration of our democracy in 1986, the focus of government and the public was on uncovering the human rights violations of the past regime. But as parallel move, President Corazon C. Aquino issued Executive Order 27 in 1987 directing the Commission on Human Rights to initiate human rights education for all sectors of society and in the formal school system. The CHR worked with the DECS to develop the curriculum for human rights, but it was in the military and police establishments that the commission worked directly in training and information dissemination.

The CHR pursued its mandate with zeal and dedication, but with no models to follow, it had to invent the process as it went along. Thus it conducted lectures on the origins and philosophy of human rights and the International Bill of Human Rights, and a recitation of the Bill of Rights found in the Philippine Constitution for uniformed personnel all over the country. The sessions were conducted mostly by academics and lawyers, in English. They were legalistic and theoretical. And the seminars often deteriorated into squabbles between the students and the lecturers on the interpretation and spirit of human rights law. Still, following orders, the military and police dutifully attended the seminars.

In 1992, the CHR realized the need to amend its entire approach to HRE if it was to have a more positive and lasting effect on its target audiences. It adopted a two-pronged approach: first, the immediate, emergency education and training for the sectors most vulnerable to committing human rights violations - the military and police; and second, the longer-term investment of integrating HRE in the school curriculum so that the next generation of Filipinos, including military and police personnel, are thoroughly oriented in human rights by the time they are grown.

While the CHR worked with the DECS on integrating human rights education into the school curriculum, it also pursued a wholistic approach to HRE for the uniformed personnel. Through in-house seminars on curriculum development, module writing, and workshop and conference facilitation, the CHR built up its capabilities in HRE. With the help of resource persons, the CHR evolved its methodology from the purely pedagogical to something more participative and experiential. Process became as important as content. Values education permeated the entire process. Case studies and structured learning exercises were developed. The facilitators used adult learning techniques such as role play, discussion groups, and other participative activities to capture and hold the attention and interest of their students.

There were bold innovations made, such as an informal dialogue between soldiers and policemen on one hand, and human rights workers on the other which was included in the program to expose both sides to one another's realities in a non-confrontational manner. Later, NGO workers were invited to attend the entire seminar with the police and military, as equal participants. All of these activities were integrated into the learning modules on the International Bill of Human Rights, and the local human rights legal structure.

This way, as the commission brought home to the participants the fact that human rights are for everyone, including security and public safety personnel, and not just for their perceived "enemies", it was able to chip away at the long-held biases of uniformed personnel against human rights and human rights activists.

It was this approach that won for the CHR the 1994 UNESCO Award for Human Rights Education. The award caught the attention of other human rights commissions around the world and I, by then a retired commissioner, found myself delivering the message of HRE in places like Vietnam, Mongolia, Indonesia, India and Canada.

In 1996, as a consultant of the Benigno S. Aquino Jr. Foundation's Institute for People Power and Development (IPPD), I had the opportunity to develop further my work in human rights education for the public safety sector. Working with curriculum experts from the Philippine Normal University (PNU) and funded by the Hanns Seidel Foundation of Germany, the IPPD evolved a seminar workshop on Building the Culture of Peace and Human Rights for the training staff of the Philippine National Police (PNP), the Bureau of Jail Management and Penology (BJMP) and the Bureau of Fire Protection (BFP), as well as the instructors' corps of the Philippine Public Safety College (PPSC). The PPSC is responsible for the continuing education of the police, jail personnel and fire fighters.

The project is a series of live-in regional seminars for academic personnel (instructors, training specialists, and education program specialists in active duty) of the PPSC; and human resource, training and community relations officers of public safety agencies. The trainees would become a pool of instructors and training personnel of the PNP, BJMP and the BFP who would integrate the culture of peace and human rights in the police force through their lesson plans and training programs.

The seminar design is highly experiential, process-oriented, and gender sensitive. The seminars involve a process of self-awareness and acceptance and finally self-empowerment. It is therefore experiential and participative, unlike anything the PPSC or the participants have encountered before. The wholistic approach involves a constant assessment of what works and what does not. Which meant that we have had to make changes along the way, as we saw fit, such as streamlining the seminar from 11 to eight days, and belatedly including vital modules on the Psychology of Violence, Spirituality and Human Rights, and Body Movement (Zhibashi/ Qi Gong).

After going through this basic course for five days, the participants learn new teaching skills and attitudes. They also do exercises on how to integrate their learnings on peace and human rights into the subjects they teach and the seminars they hold, and demonstrate the use of these before their peers.

To date, a total of 204 public safety officers, instructors and officers have attended the seminar workshop on Building the Culture of Peace and Human Rights.

The seminar on Building the Culture of Peace and Human Rights is built on my experience in developing HRE at the Commission on Human Rights. We began with an inventory of PPSC courses related to peace and human rights, such as Human Rights, International Humanitarian Law, the Moral Recovery Program, Values Orientation Workshop for Block Commanders, and others. The information gathered included curricula, methodologies, course duration, training materials, and impact evaluation, when available.

A module writing team composed of representatives from the PNU, PPSC and IPPD was formed to draft, validate and finalize the training program. They were assisted by experts with wide experience in values formation, peace and human rights education, skills training in active non-violence and conflict mediation and transformation, biography work, block commanders training, integrated arts and Philippine culture. Based on the design of the training program, appropriate materials were developed such as training modules, case studies, visual aids, video clips, games and others, and organized into a training manual.

The seminar-workshop was pilot-tested in October 1997 with 44 police instructors/trainers representing 16 regional training institutes and six national training academies attending the 11-day exercise. It was well-received although the participants observed that it was too long. So when we brought the seminars to the regions in Davao, Bacolod, Baguio and the National Capital Region from March to October 1998, we compressed it to eight days.

In October 1998, the PNP requested the IPPD to mount a special five-day workshop on Building the Culture of Peace and Human Rights for 28 Chiefs of Police from the Metro Manila area. Instead of teaching skills and sample modules, the final product of the Chiefs of Police workshop was an action plan on how to make their stations human rights friendly.

Working with a sector that is not known for its discipline can be difficult. We have to be prepared for any eventuality, such as getting students who are mere substitutes for the target participants, and who do not even meet the required rank or assignment. For this reason, it is a blessing that our modules are flexible and we have an excellent team of facilitators who manage to adjust to every new situation.

One sign of the high acceptability of the seminar is the recommendation made by every group of participants that their superiors be made to undergo the same seminar. They have also suggested that the seminar be opened to the other sectors that public safety officers interact with, like the media, prosecutors, judges and community leaders.

IPPD has been asked by the PPSC and the PNP to continue training public safety officers in building the culture of peace and human rights. It has also been asked to help the PPSC reform its curriculum to be relevant to the establishment of a civilian police force, as required by a new law. The IPPD welcomes the opportunity to help the PPSC and PNP develop their own capability to train their own men and women in peace and human rights education. IPPD is also open to developing teacher-training seminars for the police and the PPSC in the coming year or two.

The IPPD believes that the future of human rights education is in capability building, the transfer of skills and attitudes to the institutions that need them. In this case, it involves the empowerment of the public safety sector so that it is does not remain dependent on IPPD or any other institution for its training needs. To be sure, the task of ingraining peace and human rights values into the public safety sector is herculean. Neither the PNP, the BJMP, the BFP, or even the PPSC, will be ready to handle their own peace and human rights education in the next three years. But the process must begin sometime and that time is now.