| No Comments | No TrackBacks

The German-Southeast Asian Center of Excellence for Public Policy and Good Governance (CPG) based in the Faculty of Law Thammasat University (in cooperation with the Hanns Seidel Foundation, Bangkok/Laos Office) organized the conference entitled “Business and Human Rights Compliance – Challenges and Trends” on 7-8 December 2017 in Bangkok.

The speakers discussed the role of lawyers (Japan Federation of Bar Associations specifically) in promoting the connection between human rights and business (Higashizawa),  the lower response rate of Asian companies (compared to global rate) to the United Nations business and human rights initiative and the influence of investors on company support for human rights (Takahashi), and the not-so-strong stress of the United Nations Guiding Principles on corporate responsibility and the questions on structural change and plight of rights-holders (Mullen). I stressed issues, challenges and opportunities (such as training for stakeholders) that should be addressed in Asia (including Japan). 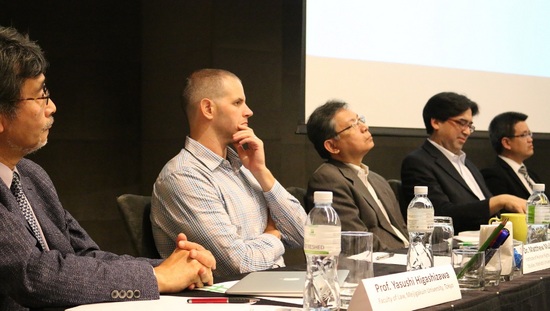 The panel on human rights compliance by companies discussed the practical issues in making companies support/respect human rights. The representative (Netithorn Praditsarn) of the big Thai company (Charoen Pokphand Group Co., Ltd.) discussed the need for collaborative attitude of all stakeholders (“how to move forward together to realize human rights”), and the lack of capacity of some companies to implement the UNGP (due to costs and difficulty in operationalizing them in the company systems). He also mentioned the difficulty in monitoring foreign workers due to lack of control of employment agencies in the countries of origin.

He stressed the opportunity to engage, rather than make judgment on, the companies and the need to collect materials on how companies could comply with UNGP from various sources for the Thai users. He also discussed how to engage the supply chain companies on the UNGP.

The panel on environment and human rights discussed land issues (recognition of customary land rights, displacement of land owners, land registration system that cause loss of land). This is the situation in Myanmar according to Bo bo (EarthRights International, Yangon). Another issue discussed was on the use of Mekong river for hydro power development – especially by China – that caused involuntary resettlement, and loss of fishery. The other issues discussed included the problem of the expanding palm plantation in Indonesia and trade in palm oil, the polluting of the sea (Vietnam case), and the issue of destruction of the environment by companies with government support (and people who expose the problem being persecuted).

The panel on BHR watchdog discussed the competition among companies as an obstacle to BHR compliance, the evolving engagement of ASEAN in the BHR, and the need for social clauses in economic development plans. There were also presentations on initiative to encourage companies to comply with BHR and to monitor overseas operations of companies. One issue was on the means to pressure investors of companies to call for compliance with human rights in the company operations.

The last panel on the role of international institutions discussed the recent 2017 UN Forum on Business and Human Rights which discussed in many sessions the 3rd pillar on access to remedy of the UNGP. (See program of the 2017 forum in www.ohchr.org/Documents/Issues/Business/ForumSession6/PoW.pdf). Heike Alefsen, Regional Senior Human Rights Advisor, UN Development Group for the Asia and Pacific, Bangkok, emphasized that during the Geneva forum the discussions noted the need to treat the 3rd Pillar as not one pillar but as part of the two other pillars. She noted the problem of stakeholders’ lack of participation in development initiatives and the need to create the enabling environment for their participation to effectively happen.

She stressed that the discussions in the 2017 UN Forum on Business and Human Rights focused on the “All roads leading to remedies” approach to emphasize the importance of the 3rd Pillar of the UNGP.

The representative of IOM spoke about the continuing problem of migrant workers and the need for using ethical recruitment practices to address the issue. Migrant work is a big business of recruitment agencies which create much of the problems of the workers.

During the open forum, I stressed the point that indeed much of the problems relate to the “local.” The problems of applicants for overseas employment start with the exploitative systems of local recruitment agencies that make the workers in debt even before leaving the country. I cited the recent research by Verite on the Chinese technical intern trainees in Japan as a good example.

I also noted that in many cases the local remedies were crucial in addressing the problems. I stressed the need to work with local NGOs (including lawyers) that assist communities and workers in seeking redress for the abuse of their human rights and hold companies liable.

The CPG conference is one of the initiatives on BHR in Asia in 2017 that had the support of many institutions (government, intergovernmental institutions [ASEAN, UN agencies based in Bangkok], NGOs, trade unions and universities). The conference held by Human Asia in Seoul in April is one of these initiatives. This indicates the growing interest on BHR in the region.